Best of Soulful Abode: The Power of @MauricioUmansky Marketing

I’m a huge fan of the Real Housewives of Beverly Hills. Know who else is adorably obsessive too? My husband—so take that sports buddies! RHOBH is my one of my three guilty pleasures alongside Spam and Double Stuf Oreos. Yes, I said it, Spam. And just like Spam, the housewives and husbands deliver a porky mystery meat that’s sinfully delicious—once you try it.

Back in March, I wrote about Mauricio Umansky’s upcoming turn as the broker for the Ritz-Carlton condos which resulted in the temporary crashing of my server. So back by popular demand, and just in time for Thanksgiving, here’s a second serving of The Power of @MauricioUmansky Marketing. Your welcome ladies.

— March 2012: So yesterday, Curbed LA reported that condos at DTLA’s Ritz-Carlton were selling like hotcakes ever since Beverly Hills Housewives resident pin-up, Mauricio Umansky, took over marketing & selling duties. When I tweeted a congrats to Mauricio, that he replied to and later retweeted to his 75k followers, it literally blew up my blog!

In a span of 4 hours, my blog went from an average 150 views an hour to over 800. Which made me wonder, if Mauricio has the power to move ladies, gay men and condos, what else can he do? 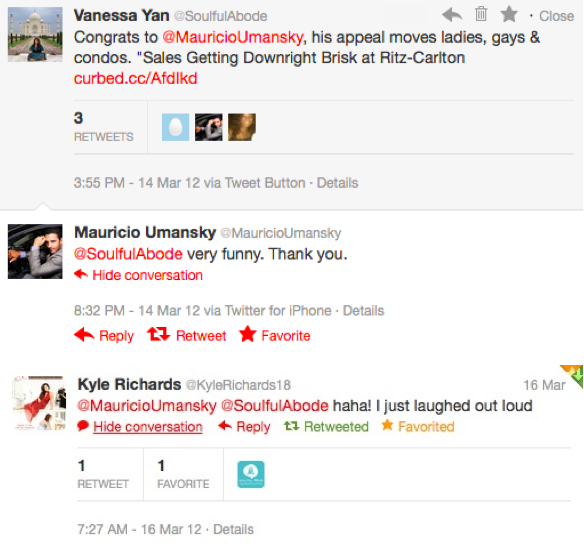 Unload an ’02 Escalade with low miles?

Leave a reply on "Best of Soulful Abode: The Power of @MauricioUmansky Marketing"