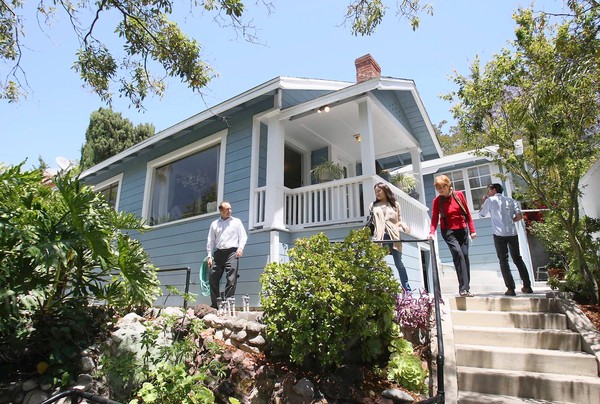 1428 Mount Pleasant St. At the open house a stream of buyers poured in. (LA Times)

Would-be buyers are packing open houses and scrambling to make offers on properties before they are even listed. Bidding wars are erupting and housing inventory has sunk to levels not seen since the bubble years.

David Dennick, who lives in Echo Park has been searching for a home with his wife for about two months. The couple have already bid on three properties hoping to find a home for less than $525,000, which is $25,000 more than they hoped to spend. “It is much more competitive than we thought,” said Dennick. “It is just frustrating because we thought we would really be able to buy a house; we are a middle-class family.”

The sharp drop in inventory along with rock-bottom interest rates have helped stabilize even some of the hardest-hit markets. The much-predicted foreclosure wave that was expected to dump more homes onto the market has not materialized. Fewer borrowers are entering default, and banks are better managing the properties they do have on their books. In addition, professional investors bankrolled by private equity firms and hedge funds are pouncing on bank-owned homes, often turning them into rentals.

The inventory problem has been exacerbated by the plunge in home prices since the go-go years. Many people who bought at the top of the cycle are so deeply underwater, they can’t get the price they need to sell and are therefore not bothering to put their homes on the market. The lack of available homes is maddening for those consumers who thought 2012 would be the year to buy.

Eddie David and his wife, Tiana Rezac, have felt the unexpected shortage firsthand. The two were sure they would buy a house this year until they tripped into the perplexing new housing reality. After being outbid on three different properties in neighborhoods from the Westside to Atwater Village, they shelved the search.

“With the downturn, it seems like there are a lot of people who have been waiting in the wings to pounce, and because the rates are low, there is just a lot more competition,” David said. “There were multiple offers. We tried to get in on a couple other homes, and even though it had been just a week or two weeks, it was just too late.”

Alex Gruenberg and his wife, Kristina, both 27, lost out on a home that ended up going for $30,000 more than they offered. The recently married couple have new jobs in the area and are looking for a pedestrian-friendly neighborhood with decent dining options. “Things are going in days.” – LA Times