Written by: Vanessa
Comments: 2
Category: Great Local Businesses, Things To Do in L.A. 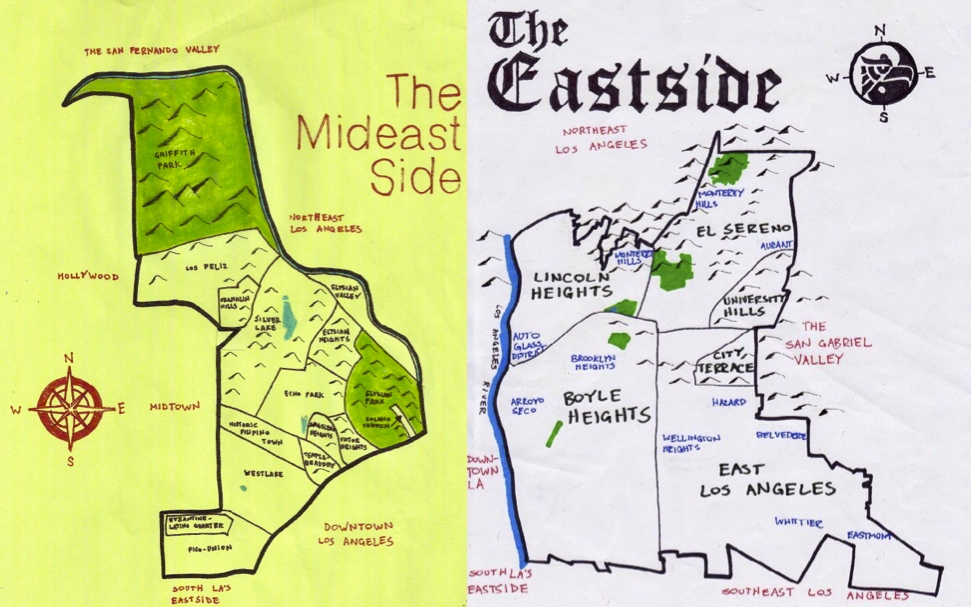 Pendersleigh & Sons Cartography: Coming soon to a t-shirt, gallery & coffee table near you

Since debuting on my real estate blog’s header, Eric Brightwell’s maps of L.A. have become the toast of my readers from hoods east of La Brea. When I first started, I searched endlessly for maps of L.A. that really spoke to me and my love for the Eastside. Who’d think that the maps that would speak to me best (a Boyle Heights native) would come from the hand of a self-described “fantasy nerd” from Iowa.

Under the moniker, Pendersleigh & Sons Cartography, Eric has created what can only be described as organic L.A. art in the form of adorable, eccentric and incredibly fitting maps of Los Angeles and its even tinier hoods-within-a-hood. Have you ever heard of Frogstown? Yeah, I didn’t think so. So what’s up next for this cartographer-cum-artist? T-shirts, postcards, art galleries and if a publisher is smart, a coffee-table book deal that I’ll be first in line to pre-order. If these maps prove to be Eric’s golden ticket (and I know it will), I’ll be sure to line him up with the dreamiest Eichler homes Granada Hills has to offer.

Background
Born in Iowa, grew up in Missouri and lived in Florida and Kentucky. I moved to L.A. in 1999.

Why did you get started?
2009. The first was Southeast L.A. County and it was just for myself to help me make sense of a part of the county I found myself in fairly often but had very little geographical understanding of. It was pretty basic but helped me make sense of its relation to surrounding areas as well as the communities within it.

The Far East Side

The next one was of the San Gabriel Valley and I added some flourishes for my own amusement including a Chinese dragon in the mountains and a compass rose based on the Tao and the seal/coat of arms of Mexico to reflect the most common backgrounds of it’s residents — the “Far East Side” map, showing just the Chinese & Taiwanese-majority communities, came later.

I’d already began writing about my experiences in different L.A. County communities (not very in-depth, mind you) for Amoeba Music’s blog beginning in 2007. The first entry was about Montebello, where I found myself for a friend’s nephew’s christening. Not long after I started drawing the maps, I combined the two. 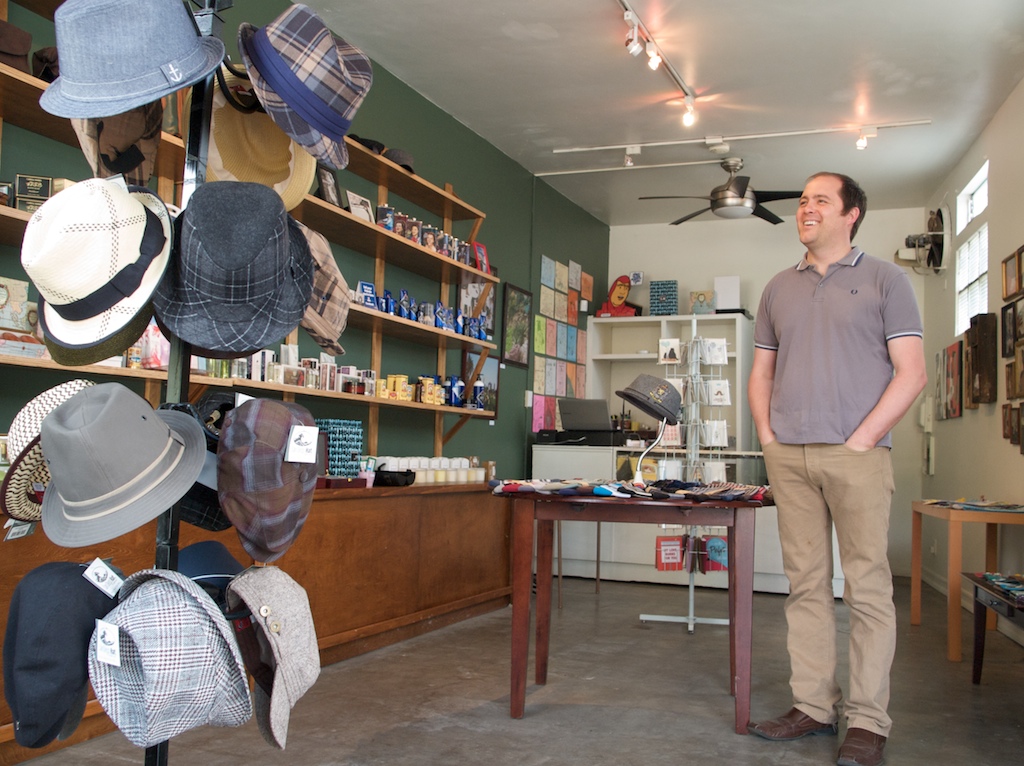 Why that map style?
I do the maps in the style that I do because I’m a bit of a fantasy nerd and I wanted to suggest a treasure map vibe. Also, L.A. communities, though the names are known, are something of a mystery to many. This seems to be the case with many Angelenos I’ve talked to. Someone who’s lived in Silver Lake for years, for example, may have never heard of 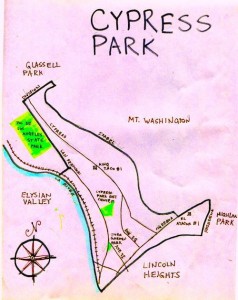 People who live in Cypress Park will tell their friends that they live in Highland Park, because they’ve never heard of their neighborhood. It reminds me of the dark ages when people were very familiar with their immediate surroundings but assumed there were cyclops and gnomes living on the other side of the surrounding hills.

Do you have any professional experience?
I have no professional experience or background in cartography (is it obvious?). But, as a kid, I used to make little treasure maps and fantasy versions of the property around our house in which a fallen tree became a wrecked ship, the largest oak in the woods became the residence of a witch, the largest sycamore became a Brachiosaurus’s leg, etc. I also remember drawing a blueprint of the house with my fantasy version of the attic turned into a third story with an observatory.

How did you “get discovered?”
I guess getting discovered was a slow process. My friends Matt and Xu DaRocha (unlike me, a real artist) were the first to show any interest. My friend Katie later introduced my maps to Tricia and Andrew at the 1650 Gallery in Echo Park where I had my first art show. Around that time, Good, LAist, and the Eastsider LA wrote a bit about me. More recently I made a map for the Craft & Folk Art Museum and after getting written about in the Huffington Post there’s been a lot more interest, resulting in people commissioning me to make maps for them and coming into my men’s shop to see them somewhat regularly.

When did you know your maps were going to be big?
I’m not sure the maps are actually big yet… although I seem to have a small following in Italy. A couple of days ago some folks from the Japanese men’s magazines “Popeye” and “Brutus” came in to write about my shop and the translator seemed more interested in the maps. While fllatterd, I’m still a bit embarrassed and befuddled by all of the attention. I guess when someone paid $250 for a map that I’d fished out of the recycling bin was my Sally Field at the Oscars moment.

Any plans on quitting your day job? 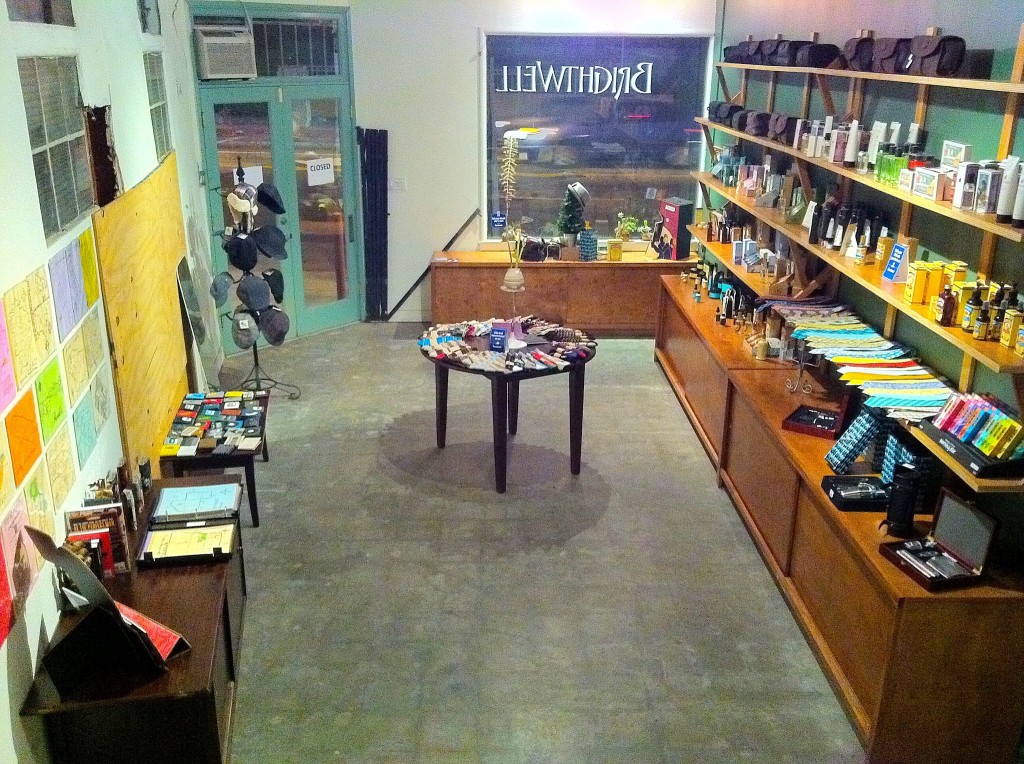 Right now I have no plans of quitting my day job. In addition to Amoeba and my men’s store, Brightwell, I’ve recently begun doing a little work for Hidden LA and KCET. However, if the maps prove to be my “ticket to a house in the Hollywood Hills,” as one patron told me they’d be (I told him I’d rather live in Granada Hills in an Eichler home) then I’d still want to keep my store open and maybe travel the world both making maps and finding products for the shop. I also have a dream of opening a vegetarian seafood restaurant. I read that there are some 7000-8000 species of vegetables growing in the world’s oceans. I’ve been told that I’m a bit unrealistic and a dreamer.

Price ranges and where can people contact you?
Currently I sell the originals for $250. Reprints range from $125 for 11″x14″ up to $225 for 24″x30.” Custom maps are $325 and plans are underway to make them into T-shirts and hopefully, eventually, postcards. A website for both the shop and maps is currently under construction so right now Facebook is the best way to reach me and to see them online. To see them in the context of the neighborhood blogs for which they were originally created, check out the blog at Amoeba.

When Eric’s not mapping L.A., he’s listening to radio from the 1940s, 80s German pop and New Orleans bounce. You can find him at Brightwell Men’s Shop or on Facebook.