The Little Church That Survived 9/11 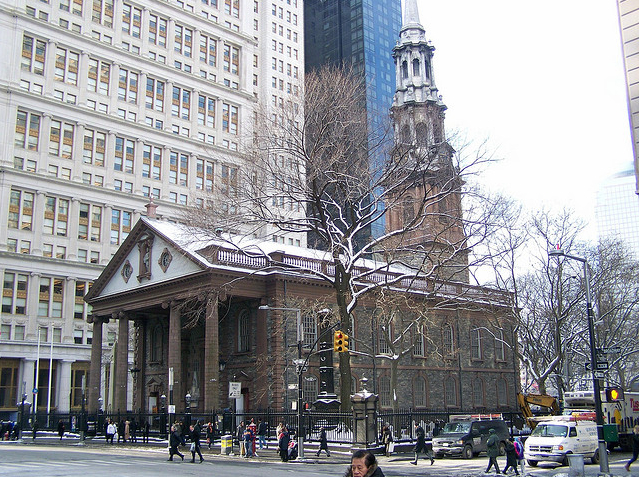 St. Paul’s Chapel Trinity Church This review isn’t for the cynics, naysayers or conspiracy theorists, but for regular people who were profoundly affected by the events of 9/11. I’ve visited St. Paul’s several times since 9/11. No matter how many times I’ve been in this hallowed space, it has never failed to elicit tears of sadness–and joy.

Located directly in front of the World Trade Center site, signs on the front gates proudly declare St. Paul’s to be: Manhattan’s Oldest Public Building, Witness to the Great Fire of 1776, Host to George Washington’s Inauguration and Survivor of the Terrorist Attack on September 11, 2001–so much history for such a little church.

Inside, it feels frozen in time. Not one wall is untouched by artifacts from that day. Set up like a museum with various exhibits, visitors are encouraged to walk the circuit, pause and contemplate. 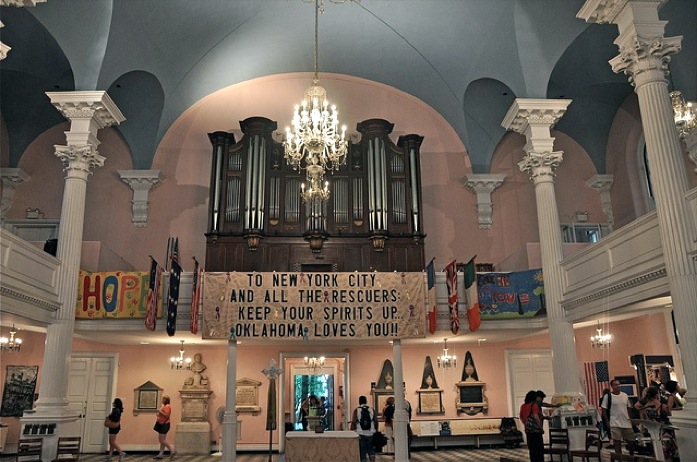 One exhibit that’s particularly moving is dedicated to the firefighters and first responders. Photographs show weary rescuers sleeping in their gear on the church’s pews–their hands and faces blackened by fire and soot. Some of the actual cots they rested on are still on display–complete with the teddy bears on pillows brought by children. Behind glass is a pair of fireman boots with thick rubber soles that were burned nearly all the way through from walking on burning debris until it hit skin. 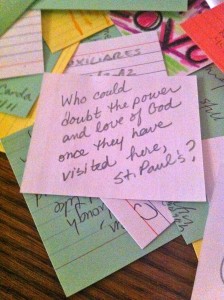 In all this devastation, you literally feel rescued from the depths of sadness as you read that in the midst of all this, ordinary people pulled together to serve those who had given so much. Several walls of photographs show hundreds of nameless doctors, grief counselors, massage therapists, restaurant owners and other regular people who provided round the clock food, comfort and care to the heroes.

There’s also a collection of support messages from school kids and people from around the world that once dotted nearly every square inch of the church. Though very sad, I enjoy visiting St. Paul’s because it’s a poignant reminder that miracles do happen–that even through a catastrophic day that took so many lives and brought down seemingly indestructible skyscrapers, a little, 250-year old church could survive and mean so much to a city in mourning.

P.S. This church is also directly in front of the Stage Door Deli–the only area eatery to reopen immediately after 9/11. Even though it was nearly destroyed, the owners, Greek immigrants, felt it was their duty to provide food and water to the rescue workers. Though it nearly bankrupted this family, they survived and are one of only two businesses that rebuilt and stayed. So please stop by, give ’em a thank you (the owner is almost always there) and have an awesome corned beef sandwich.

0shares
Tags: Destinations, I Love NYC, Things to Do

Leave a reply on "The Little Church That Survived 9/11"