Getting Poked at ERock Community Acupuncture 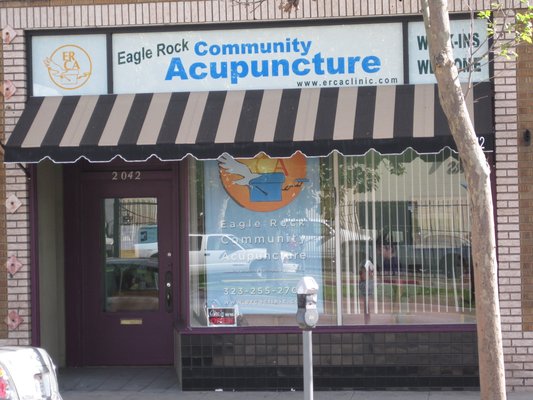 Located on Colorado with easy parking in the front

Eagle Rock Community Acupuncture (4/5) I have to preface this review by saying, I’m not New Age-y and I’ve been known to partake in some Spam musubi action more often than I’d like to admit. I’m as skeptical as it comes to alternative treatments outside of Chinese herbal medicine–I believe in it. That being said, getting poked and prodded by an army of hair strand sized needles is an entirely different story.

As many chair-based workers can attest, back, neck and should pain sucks. It seems like the moment I turned 30, everything began falling apart and my lower back was no exception. After a particularly nagging last few weeks and two unsuccessful chiropractic visits, I decided to check out the folks at Eagle Rock Community Acupuncture with their 23 glowing 5-star Yelp reviews.

When I first entered, terror was quickly erased by a warm greeting, spa-like music and the smiling faces of patients exiting the treatment room. I was given a questionnaire with about 100 different ailments and thankfully, I only needed to check 5 boxes.

After a brief chat, it was decided that my lower back needed to be addressed first and off we headed to the La-Z-Boys. Allow me to elaborate for a minute. La-Z-Boys have got to be the greatest American invention. They’re hideous to look at, but amazing to nap on. So continuing…

After picking a chair, I sat back, tried to relax and kept my eyes tightly shut. Then, a whole lot of nothing happened. I waited for the blood, the pain the wayward needle to hit a nerve or artery, but it just never happened. Honestly, plucking your eyebrow is more painful.

About an hour later, I awoke from my slumber – a slumber that I must say, is one of the best naps in recent memory and one that I repeated again yesterday. I don’t know if the treatment will provide long-term relief yet, but I will say that after treatment #1, the pain I had for the prior 3 weeks vanished. At a sliding scale cost of $25-40 a visit, I’m willing to give it a try to keep those meds at bay.

Leave a reply on "Getting Poked at ERock Community Acupuncture"